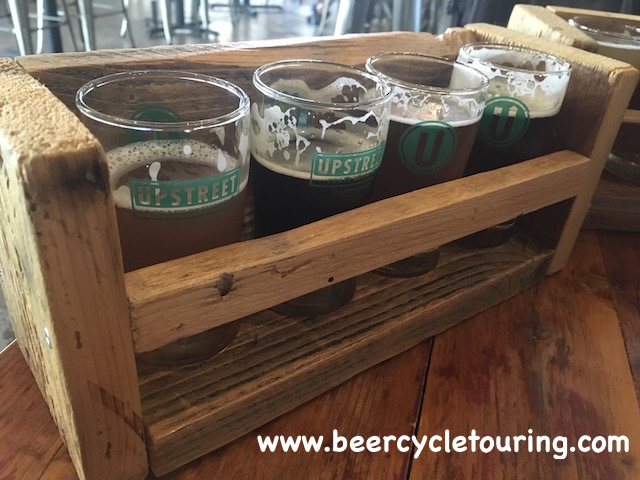 Beercycle Touring is a ‘research’ trip! Cycling around the world discovering cycle friendly breweries and finding tasty local beers (which ones to drink, which ones to avoid). The plan is to share our findings on the web and start to build a beercycling community.

What’s your background? Who are you two??

Kelly Sheldrick (30) and Michael Cowgill (31) from Perth, Australia. We are an Aussie couple that share a passion for travel, adventure the outdoors…and beer! In 2014, we discovered cycle touring, and headed off on our first cycle tour. We cycled 8,500km from the France to China. We loved it so much that our next plan is a world cycle tour. We started the tour in Vancouver on 16th June 2016, and started the trip by cycling across Canada. When cycle touring we always love to carb load with delicious sweet nectar of the gods, beer! We cycle for beer, and beer helps us cycle….it’s the circle of life!!!

Everyone cycles for a different reason. For us it’s a great way to see a country and experience different cultures. You’re off the tourist trail and you meet locals.
We noticed during our cycle trip across Canada, that we often treated ourselves to a local, craft beer after a long day or on our rest days. Cycle touring definitely makes you appreciate the little things, and after a long, hot day sweating up a steep hill, a cold, tasty beer is about the best thing on earth (along with big portions of food and showers). It was interesting to learn that other cyclists we met seemed to do the same thing.

How does beercycle play into your world tour?

Cycling and beer are two things we enjoy – and after speaking to a lot of other cyclists, we’ve discovered that we aren’t the only ones that enjoy these two things. Actually, it seems to be quite common that people that enjoy craft beer, also enjoy cycling.

Someone that enjoys beer and likes to try different local, craft beers in a cycle friendly environment. I hope that Beercycle Touring will eventually become a community of cyclists that have a passion for supporting cycle friendly establishments and tasty brews.

How responsible is it to bike around to breweries drinking?

Obviously we aren’t encouraging people to get tanked and ride around on their bikes. I’m not even suggesting cyclists ride from one brewery to another, but one thing we’ve noticed is that most cyclists, enjoy good (usually local, craft) beer, just as we do.
While on tour the last thing you want is to wake up with a hangover, so I would say the majority of cyclists would be responsible and only have one drink or a tasting flight to share. Others cyclists that aren’t on tour, tend to be quite health conscious, so again I think most of them would only drink responsibly. For those that do want to get drunk, we will also be listing all the breweries that provide cyclist camping.
Beercycle Touring isn’t about getting drunk, it’s about enjoying the simple things like a good brew in a cycle friendly environment. Breweries that have bike racks, or cyclist campsites, big meals, support cycling events or provide free water are all the type of breweries we will be promoting.
So, no I wouldn’t say just biking around from brewery to brewery and drinking beer is necessarily responsible, but that’s not what being a beercyclist is about.

How have people responded?

This is a very new project that we are working on. So far the feedback I’ve had from the cycle community is very positive. I don’t think this has been done before, and with the craft beer industry booming and more people becoming health aware, I think this is something that will interest a lot of people.

How long have you guys been on tour?

When will it end? Will it end!?

No idea! We are just taking each day as it comes. It’s too hard to plan while on tour so we’re doing it in stages, Canada was the first stage and next is the USA, Mexico and Central America.

How can others get involved?

If you know of a cycle friendly brewery let us know and we can add it to our map. Also if you have any beercycling stories/ photos you want to share then you can drop us a line. Our blog is Cycle Trekkers and the beercylists site is Beercycle Touring and we have a new facebook group as well where people can share their stories. If anyone wants to get in touch with their stories or let us know of a cycle friendly breweries our email is info@cycletrekkers.com

When do you leave Halifax (Canada) and where are you heading?

April 2nd. Next we are heading across the USA, through Mexico and continue to the tip of South America… from there we’re not too sure.

Life is awesome - make the most of it, while you can! I love to travel, keep active, meet new people and challenge myself. I have a background in environmental management and tourism. Yoga teacher, running coach and massage therapist at www.KellySheldrick.com Previously was on a world cycle tour - 20,000km on two wheels! Join our journey and check out where in the world we cycled at www.cycletrekkers.com Safe travels!
View all posts by Cycle Trekkers →
This entry was posted in beercycle, Uncategorized and tagged beercycle touring, beercyclist, world cycle tour. Bookmark the permalink.